As I said, the Qalandiya checkpoint deserves its own very special post. It is a special kind of oppression that has been mastered by Israel, and it really deserves some praise.

I spoke briefly before about the mechanisms of separation between Palestinians that Israel has devised. Palestinians in the West Bank, in Jerusalem, and in Israel proper all have different forms of identification. People in the West Bank have West Bank or “green” IDs. They can travel in areas “A” and “B” of the West Bank (Palestinian Authority controlled) but not in Areas “C” (Israeli controlled). For example, yesterday we had to cross a checkpoint to go to the Dead Sea, which is in area “C”. We were allowed in because two of us were carrying US passports, but they could have just as well turned us away. Then we saw signs for a fresh water spring and did not get as lucky at that checkpoint. We were turned away because two of us were carrying “green” IDs.

Palestinians who live in Israel proper carry Israeli citizenship but are not treated equal to Jewish Israeli citizens. After all, it is the Jewish State and if you’re not Jewish in a Jewish State you are not equal. There are few borders through which Palestinian citizens of Israel can cross into the West Bank where other Palestinians who share a culture and an identity are a majority. This matrix of separation and control has effectively created almost three divided Palestinian populations within the same territory, and that is not to mention the refugee status Palestinians of Iraq, Syria, and Lebanon who cannot even dream of seeing Palestine. Jews in this country, however, all have Israeli citizenship, and they can come and go anywhere. No separation mechanisms are set up for them. They have separate roads to drive on and different color license plates so they can drive on them.

The checkpoint is a giant momentary prison. Meaning that in the few minutes while one walks through she is in an animal cage. To get to the soldiers there are a sequence of barriers and corridors. People have to wait at the whim of the soldiers. They usually allow three people in at a time, and between those three people they typically allow several minutes to pass before they let anyone in. Meanwhile Palestinians are left waiting in multiple lines in cages–literally long cages in corridors. Not only are there wire fences on your left and your right as you wait, basically the exact width of a human being. But the fenced wire also covers the top of the corridor. Literally, Palestinians pass through cages to get to Jerusalem.

Once as I crossed Qalandiya I heard a conversation between two men who did not knwo each other. Above the cage we stood in, a bird was flying. One man said to the other, “Look at that. Look at the freedom that bird has. It has more freedom than we do.” And the other man replied, “You’re wrong. That bird is also carrying Palestinian ID.” 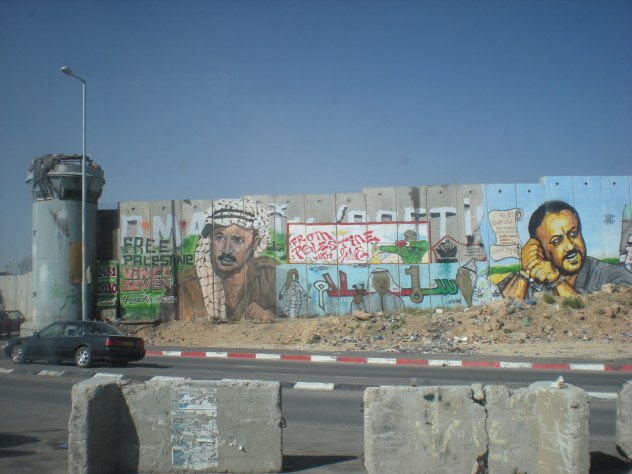 The Apartheid Wall just outside the Qalandiya Checkpoint. 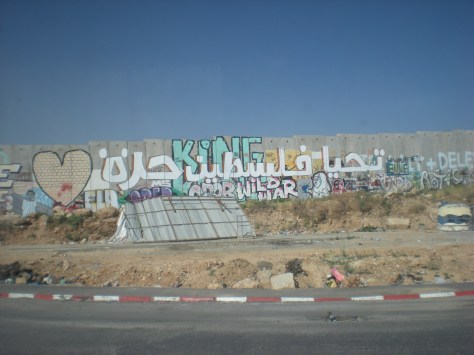